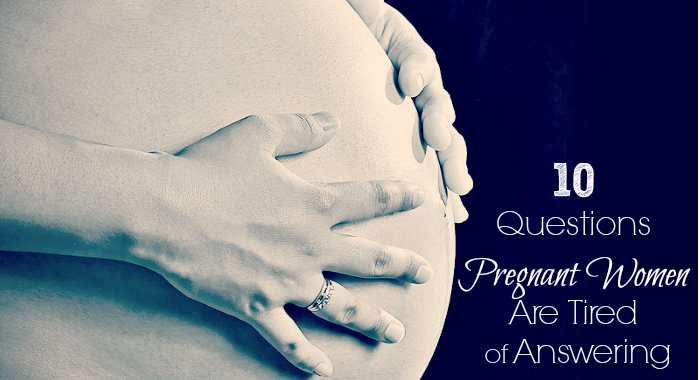 We all know that pregnancy is a miracle, but it’s not always roses. There are a lot of people who tend to speak before they think when it comes to chatting with a pregnant women and there are many of the same questions asked during those long 9 months. From the weird symptoms and complications of pregnancy to how the world now interacts with you — once you’re gestating a new life, you seem to be free game to be asked anything.

So, if you have a pregnant person in your life, are pregnant yourself, or plan to become so one day — here are some questions pregnant women universally don’t care to be asked.

I have this thing about due dates — the more people you tell the exact date your doctor and ultrasound confirmed, the more annoying phone calls you will get when you’re two weeks to the due date (and after) with people wondering if you’ve had the baby yet. I like to keep it simple and say I’m due [enter month name] because that due date doesn’t really mean too much.

2) Do you know what you’re having?

I know that when asked this people want to know if you know the gender of the baby, but sometimes I like to answer more literally and say, “yes, a baby”. While I do know the gender, I am not sharing quite yet — but I can confirm it is, indeed a baby.

3) Are you going to breastfeed

I know it can open a dialogue that can be an important one, but answering this question feels like will get judged no matter how you answer. If you’re close with someone and it’s not just a random stranger it’s still probably best to wait until or unless they strike up a conversation about infant feeding first.

This is always asked when you’re like only 5 months pregnant, half way there and then see the shock and horror in people’s eyes when they hear that you still have months and months left to go. It’s judgey and puts a shame on the pregnant body, which I don’t think is okay ever.

Usually a follow up question to the previous one and rarely ever twins.

Generally this is not a bad question to ask someone, although it can at times feel like the generic how are you feeling we say after we say hello. For me, I find it a little tiring answering because no one really wants to hear me complain. I don’t like to complain and to my super friends I will, but the random stranger doesn’t want to hear about your vomiting, lack of sleep, aches and pains, or bowels.

You get asked this all the time as a gestating woman and while it’s not bad, there are times where you are asked multiple times in one day and that can get tiring. I like the idea of those shirts that some women wear that answers those questions already.

8) Have you read What to Expect When You’re Expecting?

I don’t know how or when this book became the “pregnancy bible”, but I don’t advise any pregnant woman read that book. To me it reads like a fear-mongering this is “all the things that could go wrong, yet avoiding the real things that could go wrong and what to do if they do” book and yet it seems to be the only one people really know.  I tell people to go out and get The Mother of All Pregnancy Books by Ann Douglas!

To me, it’s a strange question to ask unless you really do know the person. Also, any way you answer it always seem like you’re going to get some sort of eye roll or judgement.

Really, if you’re lucky enough to be asked first and not just straight out accosted, that’s pretty good. Still, I don’t get the fascination of touching a pregnant belly — especially from strangers!

:: What question were you or are you tired of being asked as a pregnant woman? Tell me in the comments! ::

Next Post: 10 Uses for Coconut Oil That Will Change Your Life