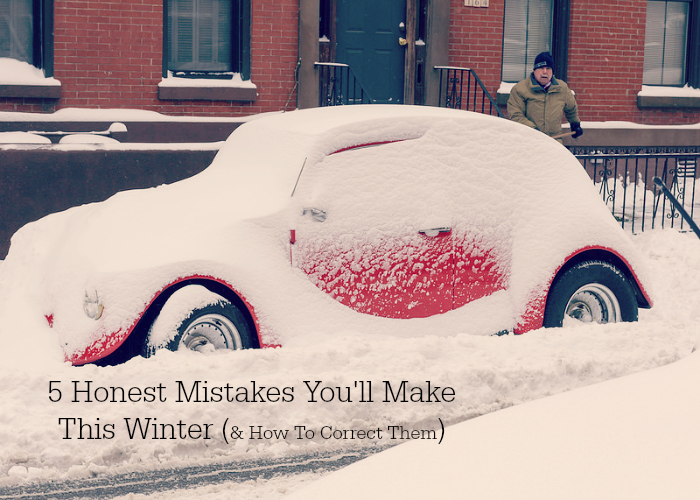 It feels really weird reporting on how to battle the snowy season when, over here in my town of Pontiac, Michigan, there isn’t an ounce of snow around. This is the first time in my 23 years of existing that there has not been any snow around my part of town, and to be honest, I am glad for it. However, some of us aren’t as lucky, and probably have been weathering the harsh conditions as early as October. Ouch! Don’t worry though, as unlikely as it is at the moment that we have no snow, it’s bound to surprise us with its chilly embrace sooner or later.

But sometimes, even when it seems so obvious, we make mistakes that make these winter days more dreadful than it really has to be, and I can vouch for that! So here are five tips on how to avoid some of the most common mistakes we make, and just how to avoid them for when the colder months of January and February dawn upon us:

1. Forgetting To Preheat Your Car

I couldn’t tell you how many times I’ve made the mistake of what I like to call, “The Cold Morning Work Rush”.

How many of you have been in such a hurry for work that you forget to start your car before rushing out into the blistering cold? I have, and too many times! If you remember to give your car a 15-20 minute head start to warm up, and while you wait, you could be fixing yourself up in the bathroom. Most times I try to do this at least an hour before I am ready to leave, gives me just enough time to make it on time for work.

2. Pouring Hot Water On Your Car

One day you might wake up and realize that that thin coat of ice you noticed only the day before grew to be something more of a shield overnight, and you know that trying to break that shield is going to be exhausting. Then it comes to you, “If I just splash a bit of hot water over it, it’ll melt down no problem”. I’ve had the same thought, trust me, but it isn’t the best idea. If there’s a layer of ice that is too thick covering your windows or windshield, pouring hot water over it will cause it to melt (obviously) but the fracture of the ice breaking into melted down chunks could leave a nasty crack in the glass as well. That’s why I suggest preheating your car a bit, and turning on the dial that sends heat directly through the windows so as to break apart the ice into meltable chunks that you can scrape down with your ice scraper.

3. Slamming On Your Breaks On The Road

This is a serious one, people! You may not think to react quick enough but it’s totally important that you make it a point to avoid slamming too hard on your breaks when driving. I know, I know, I know, you’ve taken your driving courses already and don’t need a reminder on how to drive carefully. However, for added assurance, I would be the first to attest to the horrors of slamming on breaks at the wrong moment. Though I was fortunate enough that my car tire only met the side of a curb, I wouldn’t have been so lucky had a neighboring car been in my direction. That’s why it’s suggested that you break lightly when driving (snow or otherwise during this season) and be sure that the car is at least a good distance apart just in case you slide.

This is one you’d probably never think about, but it’s certainly one to be considered. Aside from the pretty snowflakes and sparkly little snow dunes outside your window, icicles are another indicator of winter being in full effect. I remember as a kid climbing onto the porch rails to grab the biggest one I saw and would stick them around in the snow in my backyard. Those were the great, innocent times of my youth. But when you get older, you see icicles as less of a play toy and more of a hazard, especially when you have younger siblings around like I do. Those icicles can get really big, so it’s important to knock them down before that point even reaches. Sure, it may take the fun out of watching them grow but you run the risk of someone getting hurt if they happen to break off at the wrong time.

5. Forgetting To Salt The Walkways

Nothing’s more horrible than wiping out first thing in the morning because you refused to shovel, snow-plow or do any activity that required braving the cold the night before. I cannot tell you how much of a hassle it is trying to walk out to your car and having to brace yourself with every little step. If every movement you make feels like the beginning to a potential face-plant into the snow, it just makes salting the walkways that more necessary. Trust me when I say it’s not the funnest thing to do during the day, but at least you’ll be able to get the mail knowing your chances of not slipping on a sheet of ice are way better with those little grainy life savers beneath your boots.

What are some of the things you guys do to beat the cold, wintry season? Let us know in your comments below!!

Previous Post: 3 Books to Get You Through Those Cold Winter Nights

Next Post: 10 Sexy Songs to Get You in the Mood for Love