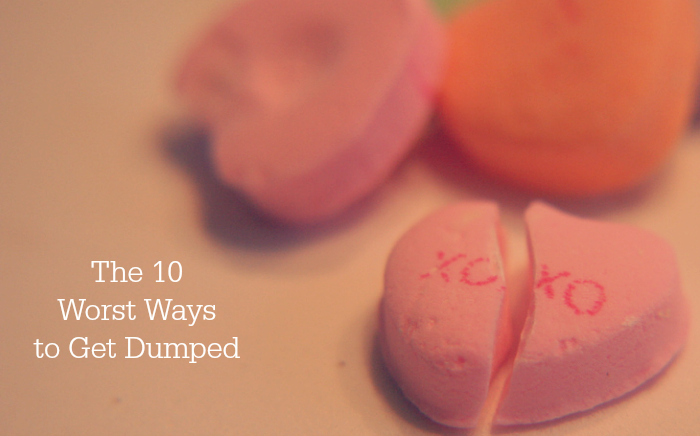 The summer season always reminds me of love. Maybe it’s because I had my first date with my now-husband in the summer, or that we got married in the mid-summer heat or maybe it all comes down to the half-naked dressed people trying to beat the heat. Whatever it is, love seems to spark this time of year.

It doesn’t matter how much love there is, there will always be people breaking up. Sometimes it’s totally needed and a long time coming, sometimes it’s a mutual decision after some discussion, and sometimes people are legitimately caught off guard. Either way, breaking up is never fun and never easy — for the broken-hearted or the person breaking hearts. There is no cookie-cutter right way do do things, but there are some ways to break up with someone that are just wrong.

A Reddit question was asked by user rockerintherye wondering what the worst way others have gotten dumped and the answers, well, they’re awful:

“My English teacher in high school took me out in to the hall during class to tell me my girlfriend was breaking up with me. Boy was that awkward.” — notedcosine

“My boyfriend hadn’t been answering his phone and had mentioned suicide to me following some awful news that his good friend and mentor had died. Concerned, I went over to his place with some food. I’d brought him food earlier that week and he had seemed pretty messed up emotionally. When I got there he was on the balcony of his apartment with another girl nine or 10 years younger than him. He screamed down at me that I was crazy and a stalker. I said nothing and walked backward to my car in disbelief as he kept yelling at me. (He had asked verbatim if I would be his girlfriend/ be exclusive, so it wasn’t like this relationship was in my head.)” — Treeleafyellow

“He answered his phone immediately after we had finished having sex. While standing next to my bed still butt naked, I heard him say, “You’re beautiful and you know I love you.” He was talking to his girlfriend who was studying abroad in Ecuador. Apparently I was the other woman. This was three months into our relationship.” — velvetmagnus

“I dated a boy on AIM one night in middle school. Two hours in, he had a change of heart and dumped me by saying “you can’t tie this rockstar down.”” — fish_sex

“By text message via her friend.” — dilsweed

“Back in middle school I was dating a guy named Brian. We were all in the auditorium for an event when this girl Candice, who’s sitting by Brian and talking with him (me being in a different class I had to sit elsewhere) suddenly yells out “Hey [Jessoftheweirding]! Brian says he doesn’t want to be your boyfriend anymore!” In.front.of.the.whole.school.” — Jessoftheweirding

“Over the phone. Literally every single time. A text, a call, and a Twitter DM.” — Elleck

“The good ol’ log into Facebook and see them listed as “Single”. I’ve also had someone try to let me down so incredibly easily that I wasn’t sure if it was a proposal or not.” — eldoctoro

“After a few days of him not answering my texts he sent me a Google hangout message that said (among other things),”Long story short I’m in Iceland”. He had moved without bothering to tell me.” — EightFooted

What is the worst way you’ve broken up with someone broke up with you?

Previous Post: 5 MacBook Tools You’ve Not Used That You Need to Try

Next Post: Simple Recipe for the Best Roasted Vegetable Stock Ever